The fish known as cichlids are those belonging to the family Cichlidae, in turn, integrated into the Order Cichliformes within the bony fishes. This set of animals is very diverse, especially in tropical freshwater ecosystems, which makes it difficult to describe the behavior of cichlid fish. This group includes many species common in aquariums, especially fish with beautiful colors, easy keeping in captivity and longevity that can exceed 20 years.

The family can contain about 3000 individuals, so the behavior of cichlid fish is usually very varied, due to the ethological characteristics of each species. Some cichlids are considered among the most harmful invasive species, since they tend to be very competitive with local specimens or have a very territorial behavior.

Cichlids can occupy a wide variety of freshwater environments, including aquatic ecosystems with dark, clear waters and even brackish water environments. Additionally, there are small species considered dwarf cichlids, measuring around three centimeters, up to individuals that can reach almost one meter in total length.

Behavior of cichlid fish in feeding

The behavior of cichlid fish in food selection is very varied, since cichlids include herbivorous species, omnivores and species that consume freshwater invertebrates or even smaller fish. Many cichlids, especially invasive species of the commercial consumer type, are very territorial and tend to protect a defined territory or not allow them to get too close to other fish, preventing other species from accessing their food sources.

The behavior of cichlid fish that have been introduced, cause declines in local populations. Generally, native fish are not able to be efficient competitors against exotic fish, so they end up being displaced to other areas or even becoming extinct.

The reproductive behaviour of cichlid fish also varies considerably due to the large number of species that exist and their adaptations to various environmental and microhabitat conditions. This group of fish turns out to be one of the most interesting also because they have different levels of parental care in their layings.

You may be interested in:  Flame angelfish: habitat, characteristics and care

Cichlids can form breeding pairs that are maintained for long periods of time, even staying together throughout the breeding season. However, some species are observed alone most of the year and congregate only when the courtship and reproduction season begins. On the other hand, the behavior of cichlid fish of other species can be gregarious, so it is common to observe large groups concentrated in abundant resources and where there are enough shelters to deposit their eggs.

Cichlids have parental care of their clutches, which means they will defend their eggs from both other fish of the same species and larger predators. As with other territorial fish with parental care, the clutches are usually made up of a reduced number of eggs, which guarantees a greater survival of the fry to which they also care for a variable period of time.

Very territorial individuals show a more striking coloration pattern. This characteristic is usually closely related to the size of the specimens and the behavior of cichlid fish that have a more aggressive personality. Among males, aggressiveness is usually more accentuated, the latter being less aggressive with females that are within their territory. Dominant males within a group of cichlids will be more likely to reproduce than smaller and less aggressive males.

Males of various species are great competitors for the best display areas to attract females. Some specimens establish their reproductive abodes in abandoned snail shells. Males usually fight aggressively for access to shells, these individuals fight for hours until exhaustion. Others build large mounds of sand in which they can stand out, due to their bright and colorful coloration.

You may be interested in:  Boeseman's rainbowfish Care, Lifespan, Feeding, Algae Eating, Size..

The clutches of many specimens usually have a biparental care, which indicates that males and females are involved in the care of eggs and fry. In this role, females can focus on the care and construction of the nest, while the male is responsible for driving away predators and scaring away those fish that invade the territory where the nest is present.

Many species of African cichlids take parental care to the maximum, as females are able to keep eggs in their mouth until they fully develop inside the egg and hatch. Females who perform this type of care are kept close to their young until they reach enough size to survive on their own.

In certain individuals such as the African cichlid, Astatotilapia burtoni, males establish very interesting mating hierarchies within the behavior of cichlid fish. In these social hierarchies, there are dominant colorful males (with great opportunities to spawn with several females), while another group of subordinate males maintain a dull coloration and present a minimal breeding opportunity. These reproductive categories are dynamic over time, implying that subordinate males may become dominant at some point in their lives to reproduce, while those who were dominant become subordinate males. These social phenotypes may alternate several times during the life of the fish.

The behavior of cichlid fish, in general, is very territorial, especially in aquarium spaces. Males are usually very little tolerated during the breeding season, so keeping several male specimens together in small aquariums is not usually advisable. In specimens such as Metriaclima estherae, aggressive interactions are usually common in larger males with similar sizes to each other.

When cichlids are kept in captivity, they usually quickly define their territories, and the introduction of new individuals into the aquarium, either of the same species or of different species, triggers an interspecific or intraspecific competition, which can cause serious injuries between individuals. In the wild, competition relationships have not been very addressed, however, in captivity males have been observed attacking larger and less aggressive fish species, to protect their territory and their clutches.

You may be interested in:  Why are 'Betta' fish usually aggressive and territorial?

Many factors influence the behavior of cichlids in a social context, including prior knowledge of a given territory, sex, age and reproductive stage, coloration and health status, size, knowledge of adversaries, ability and daring to initiate agonist behavior. Due to these characteristics, when keeping several species of cichlids in an aquarium, it is necessary to keep an eye on them, since sometimes compatibility in captivity can cause some problems.

Interactions with other species

In captivity, if you have several species of cichlids, as a rule it is common for disputes over territory within the aquarium. To solve negative interactions within an aquarium, it is valuable to offer shelters for weaker individuals, thus avoiding, to a large extent, unnecessary confrontations. This is very important, especially when it comes to providing food, because as we have mentioned, some individuals can monopolize all resources by being very competitive.

In certain cases, the introduction of cichlids outside their range can cause strong negative interactions with less competitive local species. This situation has been documented on several occasions, for example, the interaction between the convicted cichlid fish (Amatitlania nigrofasciata) with the creole mojarra (Cichlasoma istlanum), and has caused declines in the populations of the creole mojarra due to competition for food resources and even for shelters.

The behavior of cichlid fish such as Herichthys cyanoguttatus, introduced into some bodies of water in North America, can also affect the reproductive development of local species such as Lepomis macrochirus, with which it competes for breeding sites. In addition, this invasive species can have aggressive behaviors with other local species, inhibiting the growth and reproduction of their populations. 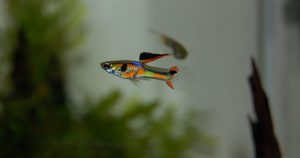 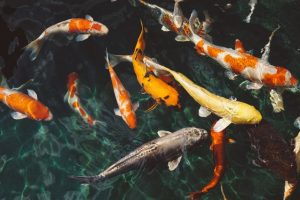 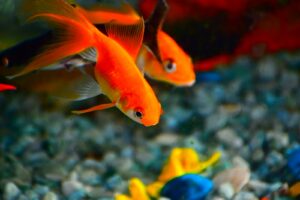